In the beginning, Public Opinion as the guardian of morality introduces the audience to the scenery near Thebes. She seeks to rework the story of Orphée and Eurydice – who, despite being husband and wife, hate each other – into a moral tale for the future ages. Eurydice is in love with the shepherd Aristée, who is in fact the Greek god of the underworld, Pluton (“La femme dont le coeur rêve“). When Orphée mistakes Eurydice for his concubine Chloë, Eurydice insists on breaking off the marriage, but fearing Public Opinion’s reaction, Orphee torments her to secrecy by playing his violin, which she’s not able to stand.

Later on, Eurydice comes to Aristée trying to save him from what she thinks is a trap to kill him. In fact, it’s a conspiracy between Orphée and Pluton, who tricks her into walking into the trap and reveals his true nature as the god Pluton. As she dies, Eurydice is taken to be in love with the God of Death (“La mort m’apparaît souriante”) and follows Pluton lighthearted into the underworld. All seems to be going well for Orphée, until Public Opinion catches up with him and threatens to ruin his violin teaching career, unless he goes to rescue his wife, which Orphée reluctantly agrees to.

The scene changes to Olympus, where the ancient Gods sleep out of boredom, until Diane returns and begins gossiping about her current love Actaeon. However, Jupiter the King of Gods, shocked at the behaviour of the supposedly virgin goddess, has turned Actaeon into a stag. Pluto then arrives and reveals to the other gods the pleasures of Hell, leading them to revolt against horrid ambrosia, hideous nectar, and the sheer boredom of Olympus (“Aux armes, dieux et demi-dieux!“). Agitated by the hypocrisy of Jupiter, the gods poke fun at all the mythological affairs their “King” has had before. Then, news of Orphée’s arrival reminds the gods of their best behavior while Pluton is worried he might be forced to give back Eurydice. Deeply moved by his pleading, Jupiter announces to go to Hell to sort everything out. After the other gods’ beg to accompany him and he consents and all gods burst into a great mass celebration on this holyday (“Gloire! gloire à Jupiter“).

Locked up in the dull gates of Hell, Eurydice is getting bored all by herself, while her goaler John Styx keeps on telling her about his mortal wealth and opulence as King of Boeotial, before he died (“Quand j’étais roi de Béotie“).

Jupiter spots the secret hideout of Eurydice and slips through the keyhole by turning into a beautiful golden fly. Only being able to buzz, Jupiter meets Eurydice and together they sing the famous buzzing love duet (“Bel insecte à l’aile dorée“). Afterwards, he reveals himself to her and promises to help her, largely because he wants her for himself.

The scene shifts to a huge obscene party the gods are having in Hell, with vine instead of ambrosia and nectar (“Vive le vin! Vive Pluton!“). Eurydice, in between, is disguised as a bacchante, but Jupiter’s plan to sneak her out is interrupted by calls for a dance. Whereas unfortunate Jupiter can only dance awful minuets, things brighten up, though, as the most famous number in the operetta, the Galop Infernal (best known as the music of the can-can) starts, and everyone throws himself into it with wild abandon. 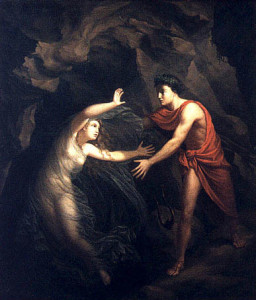 Ominous violin music heralds the approach of Orphée in company of Public Opinion, but Jupiter promises to keep Eurydice away from him through a covert scheme. As in the original myth, Orphée must not look back, otherwise he will lose Eurydice forever (“Ne regarde pas en arriere”). Public Opinion keeps a close eye on him to keep him from cheating, but Jupiter throws a lightning bolt, making him jump and look back, and so all ends happily, with a reprise of the Galop.